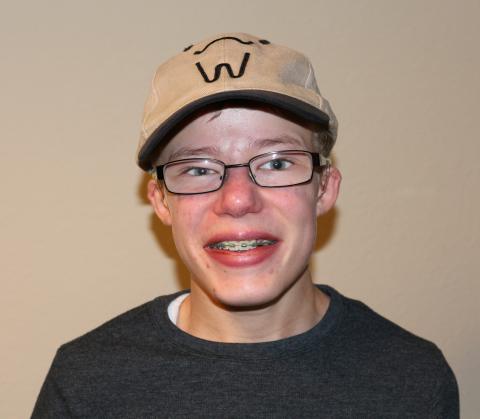 During 7th Grade in Texas, your social studies class is Texas History.  Recently, Wilson was studying the times when railroads were arriving and the "vaqueros" would have to drive cattle from Texas up to Missouri and Kansas to get on a train to packing plants back east.  They went for $3-$6 per head here, but $40 each up there so the trip was worthwhile.  As an interesting side note, we live in the town of Katy, Texas - named for the MKT railroad that replaced the cattle drives to Missouri and Kansas from Texas (hence "MKT").  The 'M' in KaTy is silent.  Part of the social studies unit was about branding the cattle.  In discussing his school day, I mentioned my memory that around the turn of the millenium Uncle Steve registered the Wilson family a cattle brand and got Grandpa Wilson a hat with the brand on it.  Wilson thought that was pretty cool and we looked up the brand at the Iowa Livestock Brand Directory.  The brand is described as a "Sunny W", so it's listed under "Character - S" and the Wilson brand is on the lower left of the first page.

Of course, we had to let Uncle Steve know about this and share our happy memory.  Next thing we know, the famous hat is here and on Wilson's head!  Wilson was beaming and was so excited he ran around the house to show us!

Grandpa Wilson died a few years before Wilson was born and our Wilson is named after that Wilson.  How cool is it that our Wilson gets to wear his namesake's hat!